Historical Context for COVID 19 policies in Japan and Asia （1）

In this and one upcoming blog posting, I offer some thoughts on what historical inquiry can offer to an understanding of the COVID 19 pandemic, focusing mainly on Japan, with some attention as well on Taiwan and Korea, all in a context of global history.

Data on COVID-19 deaths per capita show that the US and many major European nations so far have suffered from 200 to 500 deaths per million people.  Countries in Asia (Japan, South Korea, China, Taiwan and others) show fatalities in the vicinity of 5 deaths per million.[1]

This is a one hundred-fold difference. TWO orders of magnitude.  Explaining this difference is important.  Some look at biomedical factors, such as the correlation between places with low rates of infection and high rates of tuberculosis inoculation (BCG), although the evidence for that is not strong.  Very logical, and important, is to consider the responses of political leaders.  Also significant are structural factors such as the degree of economic and social inequality in a society, the general health of a society’s population, and the general quality of, and access to, health care.  Elsewhere I have written on how such factors, along with historical ones, might explain the relatively successful containment, of COVID-19 in Japan and elsewhere in Asia, compared to Europe and North America.[2]

In this and a second blog post, I will elaborate on some relevant historical practices or precedents.  I am not able to say with confidence that these historically rooted practices were decisive in shaping outcomes in the present crisis.  But they did shape behavior and policy.  And they might have been consequential.  If so, the process by which they emerged is worth considering.

Commentators on COVID-19 in Japan and worldwide have pointed to several historically grounded cultural or social practices that may have enabled Japan in particular, or Asian societies in general, to avoid the devastation wrought by COVID-19 elsewhere.  The list is familiar in media accounts:  the widespread pre-existing habit of mask wearing as a preventive health measure; bowing in greeting, rather than hand shaking or hugging, or kissing on both cheeks as in Europe; the Japanese practice of removing shoes at the entrance to a home  (At the same time, at least one longstanding workplace practice seemingly makes Japan particularly vulnerable to COVID-19 infections: the ubiquity of crowded offices, devoid of cubicles, where desks and their occupants face each other without barriers).

Of these various practices, one seems to be unarguably effective in slowing the spread of the virus (although not, of course, a magic cure-all).  That is widespread wearing of masks, a practice common at least to Japan, South Korea, Taiwan, Hong Kong, and China.  Anglophone media commentary tends to present this as a “cultural norm” or as a “culturally ingrained” practice.[3]  Some of these media reports do recognize that the practice had its Asia origins in an early 20th century reaction to pandemics.  Even so, they are grounded in a sort of cultural essentialism that ignores the role of Western experts and policies in Western nations—that is, the global context—in the emergence of “Asian” cultural practices.  A modest dip into the historical evidence points to a long global modern history (reaching back to the 19th century) by which mask wearing as a public health practice emerged, in a far from linear faction, with no clear national champion, and until recently no sharp East-West divide.  This is a complex story, with some surprising ironic twists, of the global exchange of knowledge and practice.  What follows is a brief and, in some measure, speculative summary.

The modern medical origins of masks worn for health purposes are Western.  A number of masks, at the time called “respirators,” were developed in the United States and Europe.  Haslett devised his respirator (US, 1848) to protect miners from coal dust.  The Hurd respirator of 1879 was intended to protect firemen from smoke inhalation.  The Scottish chemist John Stenhouse developed a charcoal respirator in the 1850s, which won attention for a range of uses.  An widely sold American book of the 1860s, “The Chemistry of Common Life,” claimed that with this respirator, a “healthy man…may without fear visit the chambers of the sick, and the sanitary officer without risk venture into the most dangerous receptacles of filth (p. 266).”[4]  By the mid-1880s, advertisements for the sale of masks called “respirators” (呼吸器), with reference to their effectiveness in Western countries, began to appear in Japanese newspapers.

In this context, it was inevitable that as systems and practices of modern medicine came to be developed in Asia, Western-trained experts in these countries would consider making use of such devices.  In fits and starts, the idea emerged in Asia and around the world, in a dialogue of practices, that masks might be effective in preventing the spread of contagious diseases.  But until the early 20th century, it appears that the “respirator” was not seen to be useful specifically to fight contagious diseases.  The consensus among experts was that poor hygiene was the most dangerous vector.  In the case of the bubonic plague in Hong Kong in 1894, the villains were fleas carried by rats.  The German-trained Japanese doctor, Kitasato Shibasaburo, did pioneering work with a German colleague to discover the rat-borne germ that caused this outbreak.

Nearly two decades later, in 1910-1911, a key moment in debate and innovation over the use of masks to fight such diseases came during and after the destructive outbreak of a pneumonic plague in Manchuria.  Experts and officials of the Qing regime in its waning days, the Russians with their stake in the Chinese Eastern Railway, the Japanese with their corridor along the Southern Manchuria Railway, as well as French and British figures, engaged in intensive, mostly competitive, and mostly unsuccessful efforts to understand and control the disease.  The Japanese authorities mainly focused on exterminating rats, based on the assumption that this new outbreak was a form of the bubonic plague.  A Chinese doctor, Wu Lien-teh (Wu Liande, 1879-1960), trained in the UK, discovered from autopsies that the plague germ was found in the lungs of diseased patients.  He concluded that this plague was a respiratory disease, and he promoted the wearing of masks among medical personnel and, it seems, the wider public.  He has come to be celebrated in China as the heroic "Plague Fighter" of the North.  He himself promoted this image effectively for decades thereafter.  His work is surely notable, but there does not seem to be a direct line of transmission from his advocacy to a subsequent spread of mask use either in China or elsewhere in Asia.  Another key figure in this episode was Kitasato.  At odds with other Japanese authorities, and in the end with no success during or in the immediate aftermath of the outbreak, he concluded Wu was correct and vigorously supported Wu’s approach to fighting the disease.[5]  The case of the plague in Manchuria shows the importance of examining global flows of knowledge, and competition between nations, and also the importance of disaggregating national units and looking at fissures within a nation.

Less than a decade later, when the unfairly named “Spanish flu” struck the world—Japan and its empire included—the use of masks came to be widely promoted.  But the route of transmission for this practice was not direct from nearby Manchuria.  Rather, the Japanese authorities were following medical practice in the United States.  In October 1918, municipal authorities mandated “the wearing of gauze masks by every person in San Francisco as a means of preventing the spread of the influenza epidemic.”  Offenders faced fines or imprisonment or both.  The massive American commitment to mask wearing as a strategy to protect not only medical personnel but the general public is sufficiently well-known to have attracted media attention during the COVID-19 crisis.[6]  Mask wearing also attracted worldwide attention at the time, spreading (along with the disease) from the US to France and England, and then to Japan and its colonies (almost 400,000 perished in Japan’s home island, with an estimated 190,000 deaths in the colonies of Taiwan and Korea).

The Home Ministry’s Bureau of Public Hygiene played the key role in managing the state’s response to the pandemic. In February 1919, unfortunately just after the first massive wave of infections and deaths had passed, the Bureau published and distributed no less than five million copies of a leaflet titled “Understanding the Prevention of the Contagious Cold.”[7] It offered the public, and medical institutions, five pieces of advice:

Japan’s colonial governments in Korea and Taiwan also promoted mask wearing.[8]  But with the March 1, 1919 protests fresh in mind, it appears that Japanese authorities, at least in Korea and probably in Taiwan, held back from widely spreading information about the 1919-20 pandemic.[9] 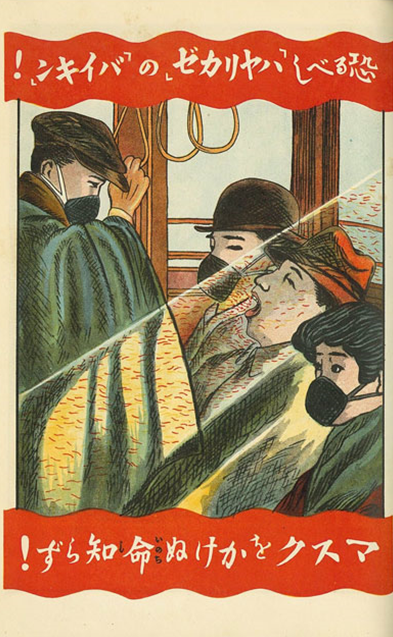 The response to the Spanish flu in Japan and its colonies thus included the first mass campaigns to encourage mask use.  More research is needed, but it may well be the case that the practice did not take root among the population at large in the following years, certainly not in Korea or Taiwan or Manchuria, but probably not in Japan either.  It seems this episode planted seeds that would only later sprout.  Japanese newspaper articles in 1927 and 1931 urged mask use during the cold season of those years.[10]  But as late as 1957, in the face of a particularly virulent flu season, Tokyo authorities felt the argue through the press, with a headline that “masks are effective,” that readers should “rethink their value” especially for wearing in crowded places such as department stores.[11]  The practice apparently had not yet been naturalized.

In addition to explaining how the early seeds of mask wearing sprouted, further investigation is needed of the process over these same decades by which the commitment to mask wearing in the face of contagious disease evaporated from the social common sense of other countries.  A recent New York Times article featured a still picture from a 1937 film “depicting a kiss with protective mask to prevent infection during a flu epidemic in Hollywood”(!).[12]  If masks were a sufficiently common sense response to the flu in 1937 in the United States to be used for safe kissing on screen, the great irony is that over the ensuing decades two processes unfolded in a parallel, inverse fashion:  a deepened commitment to masks for protecting health in East Asia and the disappearance of the commitment in at least one Western nation.

The lesson, I believe, is that “cultural” practices in the realm of public health, as in all realms, are both malleable and permeable.  They are shaped and reshaped through global flows of information and knowledge production that are neither unidirectional nor linear: never simply from the West to the Rest, nor simply from the past to the present.

[6] Paul French, “In the 1918 flu pandemic, not wearing a mask was illegal in some parts of America. What changed?” CNN.  April 5, 2020.  This report reprints the relevant page from a San Francisco newspaper.

[7] Juhee Kang, “A Thorough Study of the Spanish Influenza”: How Japanese Party Politics and Ministerial Conflicts Reduced the Pandemic, International Journal of Korean History (Vol.23 No.1, Feb. 2018) p. 63 on the booklet.  Kang also details in this article the ongoing intense rivalry between Kitasato Shibasaburo, who set up his own private institute to study infectious diseases, and the government’s Institute of Contagious Diseases, part of Tokyo Imperial University.  The rivalry impeded effective response both during the pandemic and efforts to understand what had happened in its wake.

[12] Nayeema Raza, “What Single People Are Starting to Realize:  what will the first post-pandemic kiss be like” New York Times May 18, 2020.